Right around the time we got Caligola, a stray dog showed up and hung around our place. Being sentimental fools, we fed her a bit and gave her some attention, and what do you know? She just wouldn’t go away anymore.

Right from the start it was clear she was not a well-treated dog. Various fresh wounds and old scars showed that she probably received a beating or two, and judging by her very careful behaviour around humans, at least some of those beatings were at the hands of humans. However, she quickly felt at home at our place and because of her intelligent character we named here Sofia.

Since we didn’t know anything about Sofia’s background, we couldn’t risk infections, etc. so we had to keep Caligola away from her. This proved quite difficult. In the end we called on the Soi Dog Foundation to collect her for neutering and vaccination (which we paid for). A day later she was released back to us. The vet told us that Sofia was probably only about one year old. This came as somewhat of a surprise, because unlike Caligola, she showed no playful behaviour. She must have had a crappy first year indeed. In any case, the relationship between Caligola and Sofia was a bit tense for almost two days, most likely because Sofia needed rest and quiet, and Caligola was having none of that. It was also the first time we saw Sofia bare her teeth to put Caligola in his place. Instead of growling, however, Sofia emitted a high pitched whining.

After Caligola realised who is the boss, things improved quickly. Sofia’s surgical wound healed very quickly and both of the dogs have had their first round of vaccination. We now let them play together and they get along very well. 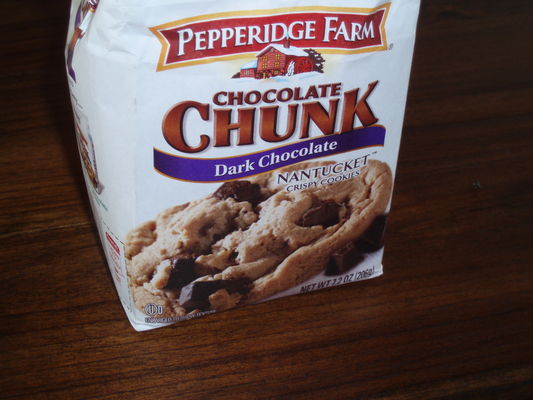 So here I was, thinking I’d have myself a nice chocolate chip cookie. Just as well I checked before grabbing in the bag blindly… 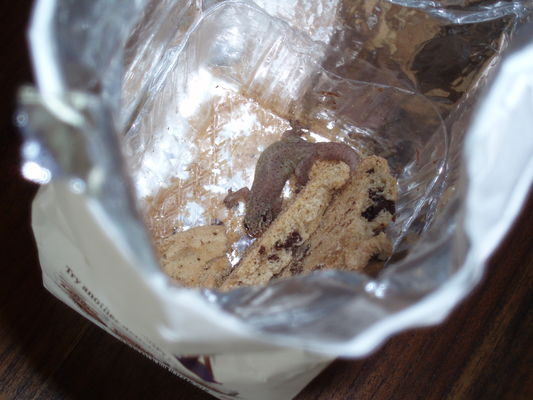 Ah, hello there, little gecko! I decided my sugar buzz could wait… 😉

The gecko jumped from the plastic container as I removed it, hung on to my shirt sleeve for a second and threw itself on the ground, landing with a splat, before running off and hiding under the fridge.

The maid in our holiday appartment (see
previous post) brought in this puppy.

The owners wanted to get rid of it and chances are it would’ve ended up abandoned before long. So, we kind of adopted the poor beast for the time being and have already found someone who is willing to take him in.

The pup is somewhere between two and three months old (too young to have been taken away from its mother) and a cross between a black labrador and a black “Thai” dog. In fact, he has inherited the trademarked ridge of Thai dogs on his back from his father.

Since we are staying in a house full of Italians, his name was quickly translated from “Black Black” to “Nerone” (emperor Nero) and then changed to that emperor’s uncle “Caligola” (emperor Caligula in original Latin). (“Nerone” and “Caligola” are the Italian names for the Roman emperors.)

I’m not sure whether the name determines the character, but little Caligola is a fierce biter. Of course, being a pup, his teeth are still developing so he hones them on any object in sight, including ankles, power cables and furniture.

On the bright side, though, he appears to be quite precocious, having already learned to do his “business” outside. During the night, he’ll usually whimper once to be let out for a moment for a quick pee. An occasional “accident” may occur, but usually he knows where and when to go.

We cannot take him to the beach yet and have to keep a close eye on him, since he is not vaccinated yet; when we first got him, he was running a fever the vet put him on a course of antibiotics first.

Despite his pretty crummy start in life, he’s very lively, curious and active. He has no fear of people and when it’s nap time, he loves to snuggle up to a warm body. It will be very hard to give him up, but it’s important to do sooner rather than later, before he becomes attached to us (right now, the world is Disneyland and everyone is Mickey Mouse).

Here’s a view of the appartment we’re staying at in Baan Bua, Nai Harn on Phuket, Thailand.

The panorama photos were stitched toghether using
hugin on Linux. As you can see the lighting is not very good, but the source images were shot with an Olympus μ700 camera. The camera allows some manual overrides, but exposure is not one of them. I’d love to upgrade to an E510, but, well, that’s quite a beast to lug around in your fanny pack.