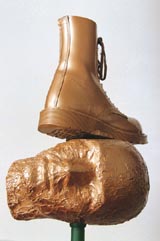 The Big Brother Awards are awarded to institutions, companies and individuals who promote privacy violations and it is much needed. There’s no equivalent of the ACLU in the Netherlands. We used to have a foundation called Bits of Freedom, but it sadly demised due to lack of funding and, apparently, interest. This is quite serious. In a time when our government not only fails to safeguard our privacy against outside intrusions, but also actively plans to intrude more into our personal lives, it is of vital importance to have an interest in civil liberties and rights. It seems, however, that we’ve been lulled to sleep over the years.

It’s a sad sign (or reflection of the general attitude) that most political parties do not seem to care about protecting the privacy of their voters. Those that do have an opinion, often have the wrong one, parroting the old, “if you have nothing to hide, you have nothing to fear.”

Using the threat of terrorism and fighting crime as arguments, the government promotes the collection of more data about individuals and allowing easier access for various agencies. All that is combined with the fallacious belief in an infallible government, i.e.: only authorised people will ever have access to sensitive data and these people will never abuse our trust. Perhaps not surprisingly, it’s the religious parties that have the least problems in believing this. After all, they already believe in an infallible higher power…