So, this morning I started diving into my old record collection. Here’s a bit of nostalgia! Yes, I was a fan of Slade. In fact, I was a fan as early as 1972, when I was five years old and went to by a record with my father. The salesman refused to believe that I really wanted the Slade record until my father said, “Really, believe me. He won’t settle for anything else.” Bah, Fleetwood Mac and Pink Floyd thrown in for good measure to capture that unique 70s feeling (I chose hide my “Mud” record). 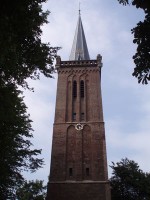 My view for 21 years

We figured it would be nice to take a drive. We have a guest from Italy staying with us this weekend, and the weather was great, so I figured it would be nice to go back to my roots and visit the village I grew up in. Man, I haven’t been there in years. I was surprised at how small everything seemed. I mean, the chestnut trees in front of the church tower right across the road from our house were much bigger in my memory. Tip of the hat to the Captain who was confined to this place for ten years as well 🙂

That other “Hem” landmark

And then I went to live in Amsterdam. My university years were marked by sleeping during lectures and drawing. Anything to avoid paying attention. Here’s a couple of things I produced in those years. Warning: insider’s humour ahead!

This one’s for George!
(Click to read the whole thing) 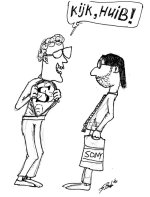